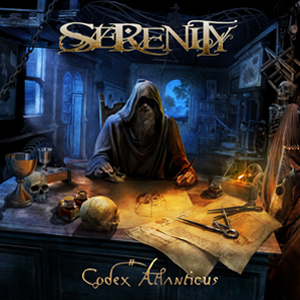 Following the historical concept of their more recent albums Death and Legacy and War Of Ages, their Austrian Amadeus-Award winning album Codex Atlanticus (Jan. 29th 2016) is this time inspired by the life of Leonardo Da Vinci. So be prepared for the thrilling stories and sciences of this famous universal genius!

I am very honoured that my music and my arrangements are part of this epic journey. Once again, I was responsible for the orchestration and synth programming and I also contributed with the instrumental introduction to the album. The intro is at the same time the title track of Codex Atlanticus and it involves the performances of two incredibly talented musicians: Simon Huber on Cello and Amanda Somerville on vocals.

The other tracks on the album cover everything from soft ballads to sing-along melodies to ‘in-your-face’ heavy metal and it really was a joy to support them with my orchestrations! Of course, I did my best to make the orchestra to sound as monumental, movie-scorish and epic as possible and at the same time support the heavy guitars and the excellent riffing by Christian Hermsdörfer.

The album is full of great musical moments and little surprises, so go and get yourself a copy!

I will update this page as soon as more news and audio snippets will be released by the band!

[…] songs with Disney-esque melodies and a simple love for all that is high powered and over the top. […] the implementation of the synths is absolutely stellar. It helps to show the quality of the musicianship is impressive and adds to the sheer bombast of the music.

[…] The classical samples are so good it sounds like a real symphony played on this record.

[…] The compositions and the production of the orchestra is ingenius, sophisticated, used very wisely and is full of bombast.

The introductory track is absolutely tremendous, really setting the scene well and giving it an all-round epic feel as it builds things up and up thanks to the perfectly-executed orchestration […]

Beside the normal album, there is also a deluxe version available for purchase. You can buy Codex Atlanticus in the following shops: