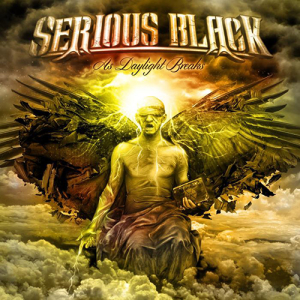 Serious Black is a Power Metal band from Germany. The band was founded in August 2014 and their first album As Dayligh Breaks was released in January 2015 via AFM Records. Its six band members Roland Grapow, Thomen Stauch, Mario Lochert, Jan Vacik, Dominik Sebastian and Urban Breed are all familiar names in the metal scenes, as they all have played in well known bands before (Visions Of Atlantis, Masterplan, Blind Guardian, Edenbridge, Dreamscape, just to name a few). So I guess it’s legit to say that this is kind of an ‘all-star’ band!

I’m very delighted to have contributed to their debut album as an orchestrator and synth-programmer on several tracks. The orchestrations are probably most recognizable on the album’s ballad and title track As Daylight Breaks. Moreover, I co-composed and arranged the instrumental track Temple Of The Sun, which serves as an intro for Akhenaton, an oriental-inspired song with a great theme!

Furthermore, I also created some soundscapes for the atmospheric, electronic track Fly On as well as for their Genisis cover of No Son Of Mine. Both songs are featured on the highly recommended deluxe edition of the album, which includes a total of 14 entertaining tracks.

If you’re into fast and heavy Powermetal, melodic guitar work, catchy keyboards and powerful vocals, this one is for you!

“As Daylight Breaks” is a must-have for fans of Power Metal the way it should be done, there’s heavy and melodic riffs, soaring vocals, and great songwriting throughout this mammoth of an album. (10/10)

As Daylight Breaks is a finely crafted and expertly played album of melodic heavy and power metal, and so quite entertaining. Put on your must buy list. (4.5/5)